Read excerpts below from  The Digital Rabbit Hole  about the coming impact of digital media in our lives:

Down the Rabbit Hole 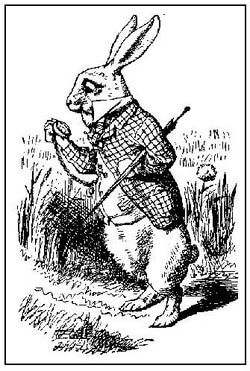 Let us imagine today’s version of a classic story, Alice in Wonderland. The story might open like this:

Alice was beginning to get very tired of sitting by her sister on the lawn, and of having nothing to do. Once or twice she peeped into the book her sister was reading, but it had no pictures or conversations in it, “and what is the use of a book,” thought Alice, “when people can see everything in color and sound on their smartphone.”

She snuggled down, grasping her glowing smartphone and began listening to it through her tiny earphones. Suddenly a white rabbit appeared in a great state of agitation, saying, “Oh dear! Oh dear! I shall be too late!” He took a smartphone out of his vest, glanced at it attentively, and said, “Be quick, follow me, or we will miss the tea.” Alice jumped up, and looking for a little adventure, ran after him. The rabbit tapped his smartphone screen, and Alice’s smartphone screen came to life with a live video of some people and creatures sitting around a picnic table having tea.

“Hurry up,” he said, as he disappeared down a hole under a hedge. Alice followed and found herself falling weightlessly, with the wall of the tunnel fading out of view. “Is there a bottom?” she wondered. She was so absorbed by it all that she forgot to be afraid.

In this new world, Cyberland, Alice could find no places to eat, no malls, only some strangers sitting around a picnic table having tea. Then, boom! Alice hit the ground. She struggled to her wobbly feet and scraped her head on the roof of a space with no walls in any direction.

A button appeared on her smartphone labeled “click here.” Alice clicked without thinking about what could happen next and found herself shrinking. The rabbit appeared again. “You are as tall as me!” Alice cried. “So?” he said. “Hurry, we’re late!”

This Alice in Cyberland scenario is no longer fantasy. More and more people—almost all of the younger generations—are falling down digital rabbit holes. We all make forays into digital places where our friends can be found, or information can be gathered, or adventures and discovery awaits.

For centuries, social groups, books, libraries, songs, movies, and other media fulfilled those functions, but they were optional behavior. Now we have the Internet, which is not optional. It is a digital rabbit hole we fall into and cannot escape. The doors and windows to this infinite cyberland is the smartphone.
​ 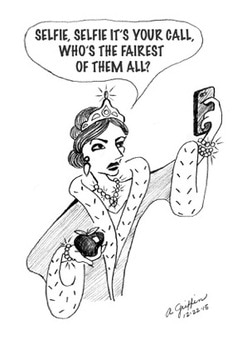 About a year ago, I was eating a sandwich in the food court of a shopping center. A homeless man settled near me, squatted down, and started rummaging through his collection of things—assorted rags, plastic bottles, scraps of paper—and a smartphone. Ignoring me, he started tapping its screen. Startled and intrigued by where his cyber journey might be taking him, I asked, “Who are you contacting?” and he answered, “I use it for everything.” It was his entire life.

Social media apparently is the most popular use of smartphones, with Facebook installed in 70% of them. Google and other search engines, the portals to the world’s knowledge, are installed in fewer smartphones—about 58% in early 2015. This ranking may increase now that search engines can be queried by voice. The average user checks his or her smartphone more than 100 times a day.

The situation gets worse with children and teens. They look first to smartphone sources for advice and guidance, and, if time permits, their parents and teachers. They may be bright, but many are self-absorbed to the exclusion of everything else.

What is going on? Are we falling into an inescapable black hole? 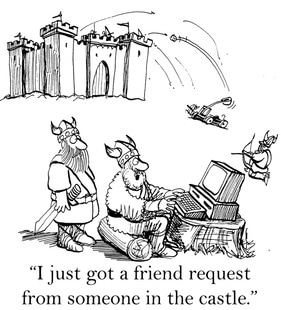 Bruce Mazlish, MIT professor of history, wrote this way back in 1993:

When Mazlish wrote this it was a great insight, but it was premature. Now, with smartphones almost continually used by many people, his insight is becoming an actuality. Our teenagers fell down the digital rabbit hole first, but our inescapable tie to computers could affect us all.

The first reason the digital media addiction has become inescapable is simply because interaction with it is so satisfying and repetitive that it has become habit. As Aristotle said, “We are what we repeatedly do.”  Although it may take several months of daily repetition to form a habit, this is not a great barrier for people almost continuously exploring other places in their smartphones and computers. It takes less time for children and adolescents whose brains are more plastic and geared to developing habits and processing large amounts of information.

The second reason will be, as Eric Schmidt, Executive Chairman of Google, said, “There will be so many IP addresses…so many devices, sensors, things that you are wearing, things that you are interacting with, that you won’t even sense it…The Internet will be part of your presence all the time.” In other words, the digital habit will creep up on you unnoticed whether you seek it or not. We see the advanced guard of this syndrome now with digital watches, Google glasses, and smart clothes (wearable computers). If you want to opt out, now is the time to think about moving to a desert island.

Does the withdrawal of smartphones cause separation anxiety? Does this action affect cognitive performance? In January 2015, Russell B. Clayton and collaborators reported the results of their study where forty smartphone users could not answer their smartphones while performing cognitive tasks (they called smartphones iPhones). The cognitive tasks were word search puzzles. They reported:

When iPhone users were unable to answer their iPhone during a word search puzzle, heart rate and blood pressure increased, self-reported feelings of anxiety and unpleasantness increased, and self-reported extended self (a person plus their possessions) and cognition decreased.  These findings suggest that negative psychological and physiological outcomes are associated with iPhone separation…

The study authors went on to suggest that:

iPhone separation can severely impact attention during cognitive tasks. Perhaps not just in the case of completing cognitive tasks, but also in all other areas of our lives including communicating with strangers, friends and family, colleagues, and caregivers. Simply not being able to answer one’s iPhone may reduce attention toward those daily interactions.

However, people are beginning to see that there should be a way to kick the digital habit. There are organizations, blogs, home procedures and so forth for this, and they generally operate under the heading “digital detox.” Indeed, there is a summer camp for adults where you check your digital devices at the door, called Digital Detox. As might be expected, it is located an easy drive from the cyber worlds of Silicon Valley and San Francisco.
A sobering thought about this trend is that very few of the poor or even middle class have the resources to benefit from digital detox. For latchkey kids, rescue probably never will happen.

We must seize control of our minds again. The smartphone and the Internet should merely be tools and resources. They should help us to stimulate and improve our minds and to communicate easily with other minds but not control us. We need to seek mental balance for ourselves and certainly for our children.
To achieve mental balance, we must disconnect from the digital media from time to time. When we plug into the social media, online news, Google search, and video games, we are receiving information and raising our emotional levels through packaged entertainment.
Nevertheless, we must definitively disconnect from the digital media. We must flush the junk out of our minds and let our imaginations sparkle and our creativity flourish. How do we go about this?
Each of us probably has his or her own way of regaining control of our mind. For some it may be a long walk on the beach. For others it may be getting lost in a good book. For me it is taking a leisurely hike. I prefer a hilly area or a mountain where I can get a kaleidoscope of scenery and bracing fresh air.
You should try different things to see what works for you.

For something grander, and if you had the time and resources Audrey Hepburn had in the movie “Sabrina”, you could escape to Paris for a cooking course. Overwhelmed by the developments at home, she said, “Be in and of the world and not just stand aside and watch.”
How do you know when to disconnect from the Internet? The decision becomes more and more difficult as we come to depend on online activities. You used to pay the electric bill by check. Now the electric company withdraws their due automatically from your checking account. You used to welcome the crisp morning newspaper at breakfast and now you read pieces of it online during gaps in the day. By 10:00 a.m., you want to know where your children are—through smartphone tracking. You are looking into devices for seeing your dog’s location by a smartphone map.  And, of course, you must find out what everyone is saying on Facebook and see the pictures of their almost every moment on Instagram.
Are we becoming happier or more fulfilled? Are the social media helping us to find ourselves or are we sinking deeper into a state of anxiety, lack of self-esteem, and no empathy?
Although we know we should disconnect, or at least dial down, there seems to be no good time to disconnect. Perhaps you could create a dramatic moment of irrevocable decision. When I decided to quit smoking in my 20s, I was going up the stairway to the door of my plane (this was before jet ways from the terminal). Everyone was waiting for the engines to start and the plane to taxi. I looked out across the tarmac and the early morning rising mist. I threw my half-smoked pack of cigarettes out over the runway. It went end over end and landed by a perplexed ground crewperson. I never smoked again. Perhaps you could throw your smartphone off the bridge to the river far below in a similar fashion.
Proudly powered by Weebly